On December 10, 2015, a Montgomery County jury rendered a verdict against an emergency room physician, Vincent D. Hayes, M.D., and his employer, Emergency Medicine Associates, P.A., in a case involving the failure to recognize and treat an upper urinary tract infection that progressed to sepsis. Gilman & Bedigian, LLC attorneys, H. Briggs Bedigian and Jon Stefanuca, argued that their client died because her septic condition was not treated with antibiotics.

Defendants were represented by the law firm of Armstrong, Donohue, Ceppos, Vaughan, & Rhoads, Benjamin S. Vaughan and Benjamin A. Laufer.

After an eight day trial, Vincent D. Hayes, M.D., and his employer, Emergency Medicine Associates, P.A., were ordered by the verdict to pay $2.6 million for causing the premature death of the 33-year-old, Sadatou Lawani. Mrs. Lawani was survived by her husband and two minor children.

The Jury awarded $1.1 Million to compensate the family for economic losses caused by the death Mrs. Lawani. Among other things, this amount included compensation for health care and attendant care for her two minor children. Moreover, the surviving husband and the children were each awarded $500,000 as compensation for emotional anguish and suffering.  These damages are automatically reduced by Maryland's cap on non-economic damages.

H. Briggs Bedigian argued that Mrs. Lawani presented to the emergency department at the Washington Adventist Hospital with clear signs and symptoms of a urinary tract infection, kidney infection and progressing sepsis. These included fever, chills, back pain, burning upon urination, increased urination, dark urine, increased heart rate, low blood pressure, and abnormal laboratory results. Despite these signs and symptoms, Dr. Hayes never recorded in the medical record that the patient had a urinary tract infection, kidney infection or sepsis. Dr. Hayes did not recognize and did not treat the infection with antibiotics even though the nursing staff notified him of possible sepsis. The patient died approximately 12 hours later.  The autopsy report notes the kidney infection and sepsis as the cause of death.

During the trial, H. Briggs Bedigian was not permitted to present evidence that the defendant was not board-certified in emergency medicine and that he failed the board exam six times.

The legal team at Gilman & Bedigian, LLC has an excellent reputation as dedicated and successful trial attorneys, helping malpractice and personal injury victims recover losses in Maryland and throughout the country. 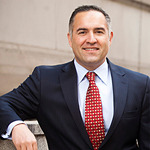