Diabetes refers to a group of diseases that affect the body's glucose or blood sugar level by causing insulin production or absorption problems. Failure to diagnose and properly manage diabetes can lead to serious complications and death.

If your diabetes has been mishandled by a health care provider, call Gilman & Bedigian today for a free consultation.

Carbohydrates in the body are converted into glucose. Any excess or unused glucose is converted to glycogen that will be used for later energy consumption and to maintain healthy blood sugar levels. The body stores the equivalent of about 2,000 calories worth of glycogen, and any remaining excess is stored as fat.

Type 1 diabetes causes the body's immune system to attack cells in the pancreas, preventing it from producing insulin. Without treatment, too much glucose builds up in the blood, which can cause serious damage. Only 5% of people with diabetes have type 1.

Type 2 diabetes is the most common kind of diabetes and occurs when the body develops an “insulin resistance” and does not react to the presence of insulin. Since insulin is needed for the body to be able to absorb glucose, type 2 diabetes leads to an excess amount of glucose in the blood.

Lifestyle habits are a major factor in developing type 2 diabetes. It is associated with an increased intake of sugars in the diet and a lack of physical activity. Currently, the rising diabetes rates correlate with the rising obesity rates in the United States.

Facts and Statistics about Diabetes

According to the American Diabetes Association, in 2015 in the United States:

Risk Factors and Symptoms of Diabetes

The causes of type 1 and type 2 diabetes are unknown, but there are risk factors that may indicate diagnostic testing and screening. These include:

Symptoms of diabetes include:

The American Diabetes Association recommends screening tests for anyone with a body mass index (BMI) over 25 when other risk factors are also present and for anyone over 45 with or without other risk factors. With the benefit of blood tests, doctors can detect pre-diabetes, a condition where blood glucose levels are mildly elevated. People with pre-diabetes are at an increased risk of developing type 2 diabetes within 10 years. In pre-diabetes, a person can take actions to delay or prevent type 2 diabetes. With exercise and weight loss, patients with pre-diabetes can reduce their chance of developing diabetes by up to 58%.

To diagnose diabetes, your doctor can order blood tests to measure:

See the chart below for normal vs. abnormal test results. 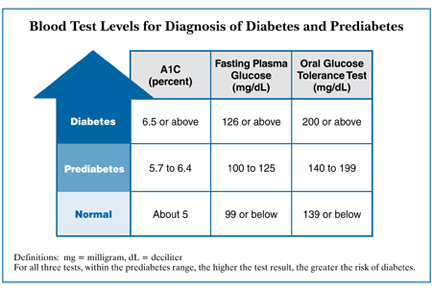 Diabetes is a serious but manageable condition with clear symptoms and simple diagnostic tests. Diagnosing and managing diabetes is vital because elevated blood sugar levels have far-reaching consequences in the body. Complications from diabetes include:

While doctors cannot always prevent these conditions, they can provide timely diagnoses and proper management and treatment to help minimize the risk of diabetes.

When doctors fail to 1) order necessary diagnostic tests, 2) interpret test results, or 3) communicate test results to the patients, they put their patients at increased risk of serious harm.

If your diabetes has been mishandled by a health care provider, contact our offices to learn more about your legal options.