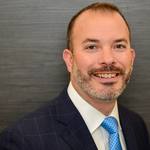 E. Merritt Lentz is a Philadelphia trial attorney who has spent nearly his entire 16-year career litigating only the most serious personal injury and wrongful death claims. His clients entrust him with significant matters, and in return, Merritt accepts this responsibility by providing zealous advocacy and tireless effort to obtain the maximum compensation recoverable under the law. As a result of his aggressive representation and detailed preparation, Merritt has obtained tens of millions of dollars for his clients through trial and settlement.

Merritt has been a perennial selection for membership with the Pennsylvania Super Lawyers, Rising Stars, since 2008. Inclusion in Super Lawyers is a distinction reserved for less than 2.5% of all lawyers in Pennsylvania, and one based on reputation, experience, and ability. He has likewise been invited for membership by the National Trial Lawyers “Top 40 Under 40” and “Top 100 Attorneys.” Given his track record above, Merritt has received invitation to join the prestigious Million Dollar and Multi-Million Dollar Advocates Forums.

Merritt is admitted to practice in Pennsylvania and New Jersey, as well as the U.S. District Courts for the Eastern and Middle Districts of Pennsylvania, and the District of New Jersey.