It’s not uncommon that big insurance companies refuse to pay people in auto accident cases. This happens frequently in Maryland auto accident cases. When it does, an attorney must be financially able and willing to invest the time and money into taking the case to trial.

This is the story about a mother and her two young children who were rear-ended by a negligent driver in Baltimore. It’s about their injuries and the injustice offered by State Farm Insurance. It’s about a big insurance company that wrongfully accused this mother of causing the accident. And this story is ultimately about taking the insurance giant to court in Baltimore, making them admit that their driver caused the accident, and making State Farm pay.

Here is an example of a case that our law firm took to trial in Baltimore in May of 2017, State Farm Insurance refused to pay our clients after a rear end collision. Instead, the insurance company denied that its policy holder was responsible, and therefore our law firm took the case to trial for it’s refusal to accept responsibility to pay the claim.

At Gilman & Bedigian, we take pride in representing our clients regardless of whether there are millions of dollars in potential recovery, or thousands. In this case, justice demanded that we take the case to trial, and in doing so turned State Farm’s offer to pay our clients nothing into a verdict that exceeded $47,000.00.

For years, State Farm stuck to its story that our Clients weren’t entitled to a recovery, even though they suffered significant injuries when they were rear-ended by a negligent driver insured by State Farm. State Farm stuck to its position all the way up to trial by blaming our client, the victim. Insurance companies often play this game because they know that many personal injury attorneys are afraid to go to trial, or are simply not good in court. This tactic is profitable for insurance companies, and State Farm is very good at playing this bluff and stall game. However, when they go up against us, they know that we don’t back down. State Farm offered nothing to our clients. We took them to trial, and in the process advanced all expenses and fees, keeping our clients from having to spend any money while they waited for us to make State Farm pay what they fairly owed.

On the day of trial, recognizing the absurdity of the position State Farm and their insured driver intended to argue to the jury, the Defendant admitted that he was responsible for causing the collision. It took years of litigation and the fear of facing a jury to get State Farm to make this admission.

But State Farm Still Refused To Pay For The Accident

However, State Farm still did not offer a single dollar to settle the claims of our Clients, a mother and her two young children.

We pressed forward with a jury trial, which lasted two days. In the end, the jury awarded our client and her two children more than $47,000.00.  After hearing the evidence and our arguments on behalf of the mother, the jury saw right through the smoke and mirrors of the Defendant and his lawyer.

The Alternative To Trial In This Baltimore Rear-end Collision:

Had this mother not retained attorneys who go to Court to fight for them, they would have continued to have been accused of causing this collision and never received the fair compensation they deserved!

Here is the first page of the verdict sheet from the Circuit Court For Baltimore City: 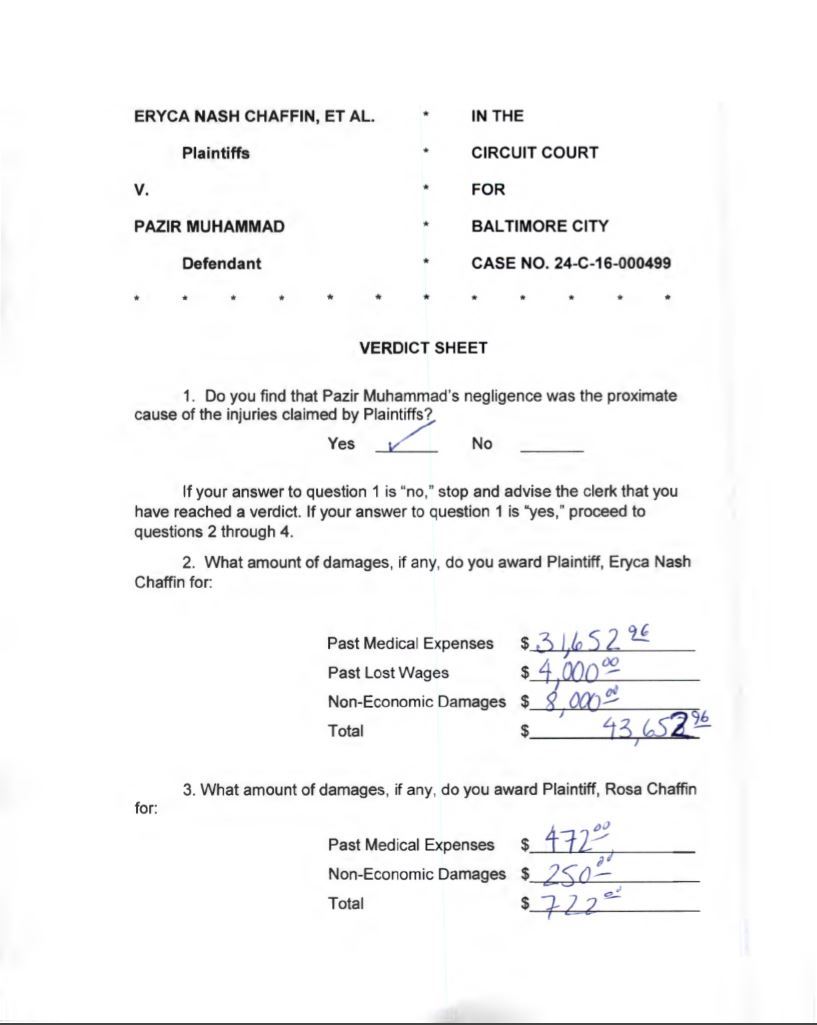 And here is the 2nd page of the verdict: 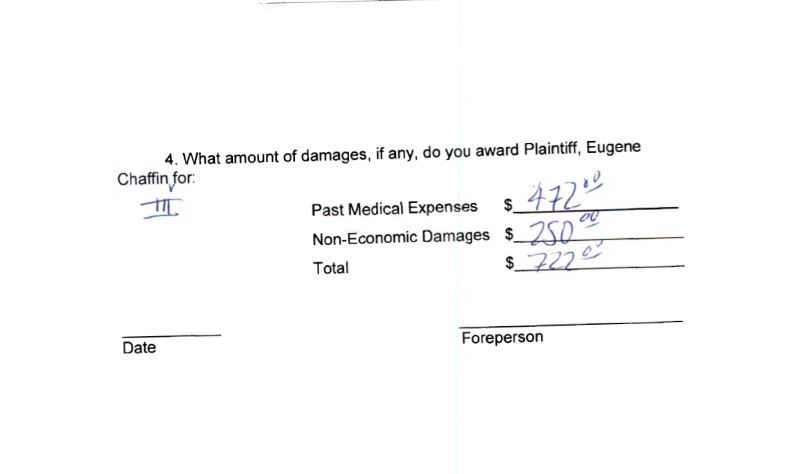